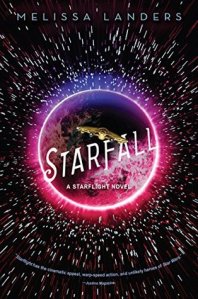 Starfall has everything you can imagine and it’s absolutely thrilling! You have space pirates, the mafia, hundreds of planets… It’s like Doctor Who meets Firefly!

Kane and Cassia are great friends who, at one point, had romantic feelings for each other. They still do, but Cassia refuses to act on them. Who could blame her? There’s a political power struggle going on, with a war on the rise!

While you rooted for Cassia and Kane to come to their senses, romance wasn’t the main story and I loved that. Starfall will take you for a ride that you will never want to get off! It is the second book of the series, however I had no trouble keeping up! It was such a thrill and I’m so glad I got a chance to read this book!