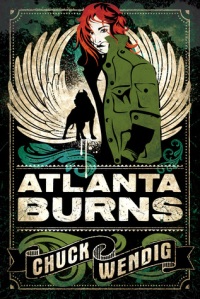 Thank you to NetGalley for approving me for this book! I enjoyed the book for what it was, but as a warning… this book is pretty dark (or at least it has some dark moments… ) Atlanta Burns is a high school student with a troubled past. She moves from North Carolina to Pennsylvania as a result and she comes with a reputation. She’s a total badass who does not stand for bullying of any kind. What I can appreciate about this book is that it touches on quite a few issues such as discrimination (of all kinds), dog fighting, and sexual assault.

The book starts with her saving a kid named Shane from being bullied because he’s Venezuelan.  For that, she’s made a friend. But she also gains the reputation of being the problem solver. Shane has a friend, Chris, who was bullied and sexually assaulted because he’s gay. The three of them become great friends, but they want revenge. The more they plot their revenge, the more you notice how racist and unaccepting the town really is. As a result, all revenge plots are never perfectly executed. Atlanta feels like everything she touches goes bad, but her heart is in the right place. Just when she feels like she’s settled into her place in life, tragedy strikes… and she feels like it’s her fault. It’s up to her to set it right.

The dialogue was a bit awkward at times, but it’s been a while since I was a teenager. This book has breached subjects such as prescription drug use, sexual assault, and discrimination that makes conversations warranted. The message at the end was inspiring. There was a mention in the beginning of the book how there’s tons of videos on youtube telling you that it gets better. Atlanta tells you it doesn’t get better… if you choose not to stand up and take a stand against bullies. So hopefully, conversations will start.